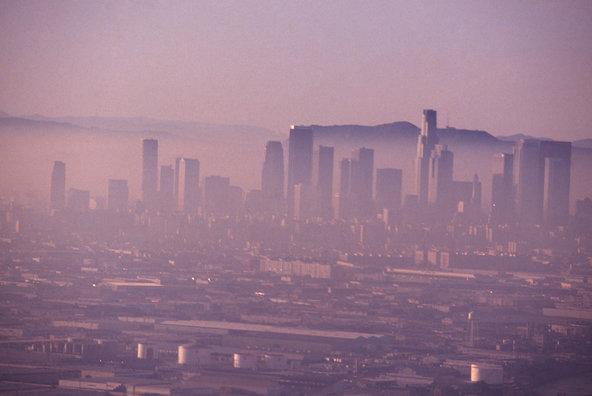 However, politicians often approve near-freeway housing because California needs affordable housing and they want additional tax revenues for their cities. Developers also are eager to build near-freeway housing, even in pollution hot spots, because they often get financial benefits from the state of California. To reduce greenhouse gases and increase mass transit, the state rewards developers who build near mass transit, and mass transit is often near freeways.

Politicians and developers also typically claim that using air filters in near-freeway homes will make them safe. However, California health officials say this claim is false because such filters don’t capture most of the diesel particles that cause nearly all freeway-related cancers.

Instead, California health officials want areas near freeways to be buffer zones, filled with vegetation, or used for commercial purposes, like warehouses—and not used for schools, retail, or residential spaces. They are especially concerned about risks to children from living or going to school near freeways. After all, US EPA confirms that when adults and children receive the same pollution exposure, children are hurt roughly 10 times more than adults.

Wiping a finger on a Los Angeles County near-freeway windowsill

The city of Pasadena has recently done at least two things that severely threaten residents’ health.

First, in the last several years, the city has approved construction of roughly 1230 residences, mostly apartments, in the high-diesel-pollution zones beside, or within 700 feet of, Interstate-210. This is directly contrary to California Air Board recommendations against life-threatening, near-freeway, residential development.

Second, on 1-24-19, the city released its “East Pasadena Draft Vision.” (East Pasadena includes mainly the areas East of Hill Street and North of Colorado Boulevard.) The city’s “draft vision” called for massive rezoning of East Pasadena residential neighborhoods, so as to make them a “commercial destination center in the city.”

Yet because of the I-210 freeway and natural wind patterns, state pollution data show that East Pasadena already has more diesel pollution than 70% of all California communities. Because diesel particles are responsible for nearly all cancers caused by Los Angeles County air pollution, and because East Pasadena is one of the worst diesel-pollution areas of the state, East Pasadena residents already suffer disproportionate health threats, compared to the rest of the city and the state.

The city’s “vision” thus appears to condemn the 22,000 residents of East Pasadena to even worse health harm and more disproportionate-pollution deaths than they already face. East Pasadena residents already have more freeway-caused autism, cancer, dementia, heart attacks, and strokes than 70% of other Californians. Yet the city of Pasadena wants to add to the health threats, deadly pollution, and traffic burdens of these 22,000 East Pasadena residents. This is unfair, contradicts state health recommendations, and amounts to environmental injustice.

Our Solution to the Problem

First, the city of Pasadena should follow state health recommendations. These recommendations warn against putting homes within 500-1000 feet of freeways. They warn that even air filters cannot adequately protect the health of people in near-freeway homes. They also urge near-freeway areas to be used either for vegetation buffers or for commercial enterprises like warehouses that avoid pollution exposure to humans.

Second, the city of Pasadena should follow the example of Los Angeles. LA says a 1,000 feet freeway-development boundary is necessary to avoid the most “negative effects of air pollution caused by freeway proximity.”

Third, the city of Pasadena should prohibit any further school, housing, or retail development in any residential areas of Pasadena that already are in the 40-percent- dirtiest-census-tracts for diesel pollution in the state. Additional commercial and retail development, in already heavily polluted areas, would only increase freeway, and especially diesel, pollution in these already-overburdened areas.

Fourth, the city of Pasadena should promote affordable housing and retail development in bus and metro transit corridors that are not already heavily polluted by freeway diesel particulates.

Diesel particles, carcinogenic air toxins, cause 7 times more cancer than all the other 187 US air toxins combined. They are responsible for about 70% of the total cancer risk in the South Coast Air Basin (California) from air pollution—an air-pollution cancer rate higher than anywhere in the US. The South Coast Air Basin violates both state and federal standards for particle pollution, including diesel particles.

In the last several years, the city of Pasadena, in the South Coast Air Basin, has approved construction of roughly 1230 residences, mostly apartments, in the high-diesel- pollution zones beside, or within 700 feet of, Interstate-210. This is directly contrary to decades of California Air Board recommendations against any near-freeway residential development because of severe health harm from freeway-diesel-particle pollution.

On 1-24-19, the city of Pasadena released its “East Pasadena Draft Vision.” (East Pasadena includes mainly the areas East of Hill Street and North of Colorado Boulevard.) The city’s “draft vision” called for massive rezoning of East Pasadena residential neighborhoods, so as to make them a “commercial destination center in the city.” However, East Pasadena already has more freeway-caused diesel pollution than 70% of all California communities. As a result, its 22,000 residents already suffer disproportionate health threats, compared to the rest of the city and the state.

Living within 1000 feet of a freeway causes much “higher rates of asthma, heart attacks, strokes, lung and other cancers, pre-term births, childhood obesity, autism, and dementia.” The major culprit in all this harm is diesel particles. They are responsible for 70 percent of all Los Angeles County cancers caused by air pollution. Because of diesel pollution, the closer that people live to a freeway, the higher their cancer rates.

One in every 526, 625, and 769 adults, respectively, living for several decades near the I-210 near Lake Avenue, Altadena Drive, and Rosemead Avenue, will die prematurely because of freeway-diesel pollution. This is a very high risk, hundreds of times higher than allowed.

Roughly 1 in every 53, 63, and 77 children, respectively, living for several decades near the I-210 near Lake Avenue, Altadena Drive, and Rosemead Avenue, will die prematurely because of freeway-diesel pollution. This is a very high risk for children, thousands of times higher than allowed.

People residing even 1000 feet away from these three locations (above) on the I-210 freeway in Pasadena face roughly a 5-times higher cancer risk from diesel particles than other California residents face.

There is no safe dose of, and no short and therefore safe exposure to, diesel particles. Even the tiniest exposure for only one day causes a statistically significant increase in daily mortality.

Children are roughly 10 times more sensitive than adults when both receive the same exposure to toxins, carcinogens, or air pollutants like diesel particles.

Children have only once chance to develop a brain or lungs or heart or other organs. If diesel pollution interferes with their organ development, there is no way to reverse the damage that pollution causes.

California health officials say that cities should re-zone heavy-traffic and near- freeway areas to exclude new homes. They point out that cities could strengthen building standards, just as they have for earthquake protection, and force developers to design buildings in ways that reduce or eliminate residents’ exposure to polluted air. Such designs include requiring windows that do not open and requiring powerful, whole-building, commercial-grade, air-filtration systems that give residents clean air.